Class Ring Lost in Maine 47 Years Ago Is Unearthed in Finland — 4,000 Miles Away

Forty-seven years ago, Debra McKenna lost her boyfriend’s high school ring in the bathroom of a Portland, Maine, department store. Shawn’s ring was adorned with an oval blue faceted stone and embellished with the tall mast symbol for Morse High School’s athletic nickname — the Shipbuilders.

Ironically, the ring was discovered in early February by shipbuilder Marko Saarinen in a densely wooded area near the small town of Kaarina, Finland. The avid metal detectorist located the keepsake under eight inches of soil — about 4,000 miles from where it was originally misplaced. 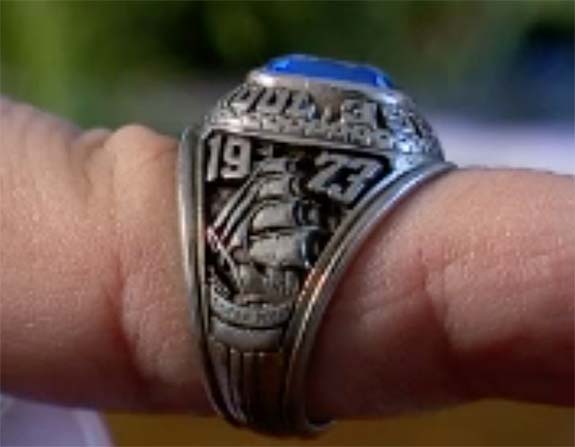 The markings on the ring provided just enough clues for Saarinen to find the rightful owner. He had the name of the high school, the year of the graduating class and engraved initials inside the band — “S.M.” The Finnish Good Samaritan posted a photo of the ring on the Facebook page of Morse High School’s Class of 1973. 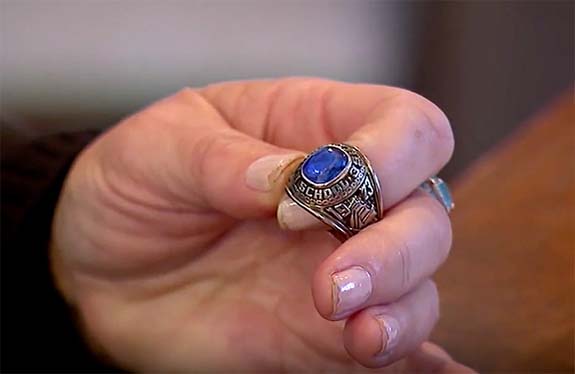 “Hello from Finland!” his message read. “I was metal detecting in the deep forest and found this high school ring.”

Alert followers of the Class of 1973 Facebook page were able to determine that the S.M. initials belonged to Shawn McKenna. The graduating class of barely 200 students included only one male with those initials.

The classmates alerted Debra, who cried when the ring arrived just before Valentine’s Day.

Debra and Shawn had met during his senior year and tied the knot in 1977. They were married for 40 years and had three children. In 2017, Shawn passed away after losing a six-year battle with cancer.

Debra said she was shocked by the unbelievable discovery and believes it might be a sign that her husband is still looking after her.

“I was feeling a little lost for a bit, and now I feel like, okay,” she told CNN. “He’s letting me know that things are good, that the decisions I’m making are right and he’s behind me on it. Like he has been through my whole life.”

When interviewed by Portland’s CBS affiliate WGME-TV, McKenna recounted the day she lost the ring in the bathroom of a local department store. She had set it on the side of the sink while she washed her hands and then forgot to put it back on. Later, when she went back to retrieve it, it was gone.

How and why the ring found its way to a Finnish forest is a mystery that may never be solved.

“It’s very touching in this world of negativity to have decent people step forward and make an effort,” McKenna told the Bangor Daily News. “There are good people in the world, and we need more of them.”

Saarinen, who spends about two hours each week as a metal detector hobbyist, told CNN that he never considered keeping the ring for himself. He was thrilled to mail it back to McKenna.

“This has been an amazing discovery. Best yet,” he said.