The 1.53-carat diamond at the center of Pepsi’s Engagement Ring Giveaway was formed in a lab with carbon derived from its short-lived spinoff, Crystal Pepsi. 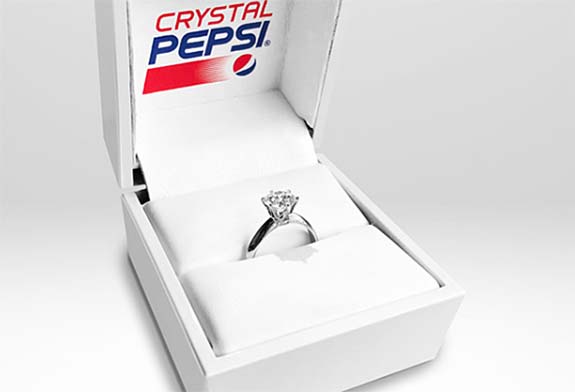 Soft-drink fans may remember that Pepsi tested the crystal clear version of its ubiquitous carbonated beverage in 1992, and then pulled the plug on the nationwide rollout a year later. Crystal Pepsi (basically regular Pepsi without the caramel coloring) was revived in limited releases from 2015 through 2018.

For this promotion, the folks from Pepsi claim to have boiled down Crystal Pepsi “to its most basic carbon form,” resulting in a powder that was used to create a lab-grown diamond.

Set in platinum, the truly one-of-a-kind round brilliant-cut diamond will soon adorn the left hand of the contest winner’s significant other, just in time for National Proposal Day, which takes place on March 20. Pepsi says the ring is valued at $3,000.

On Pepsi’s official Twitter page, the company wrote: “Propose how you’d propose for a chance to do it with The Pepsi Engagement Ring – the only ring made with real Crystal Pepsi. Really.”

Contestants must tweet their proposal, along with up to four photos and one 30-second video, using the Twitter handle @Pepsi, and the hashtags #PepsiProposal and #Contest.

The winner will be chosen by a panel of judges based on originality, quality and marketability appeal.

“How do you make your passion clear to the one you love most?” the company stated in a 34-second promotional video that was posted to Twitter. “You could propose with the thing you love most: Pepsi.”

The romantic clip, which features newly engaged couples, ends with a closeup of the Crystal Pepsi rock and the tagline, “A ring with taste.”

The contest runs through March 6 and a winner will be selected during the week of March 16.